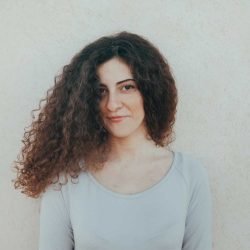 Francesca Manolino (b. 1987) is a freelance photographer currently based in Italy, represented by Luz Agency in Milan.

She graduated in Photography in Turin and at Ecole Nationale Supérieure des Arts Décoratifs in Paris in Photo/Video. She has also a Bachelor in Anthropology.

She worked in the Parisian gallery “Fait & Cause” to promote photography and help to become aware of social and environmental problem.

Her artwork takes a critical view of social and environmental issues, using an intimate and metaphorical approach. Her studies in anthropology influence her projects, especially the anthropology of space.

She often investigates the relationship between humans and a particular environment.

Architecture as a human landscape which reflects the thoughts and the aims of a society.

In the last period she tries to develop projects by choosing a positive point of you, bored of the negativity of the comtemporary media on describing society.

Her work was exhibited in Turin, Paris, Bangkok and Florence among others.
Made with Viewbook